Three Little Bops (1957), directed by Freleng, is a retelling of “The Three Little Pigs,” casting the three little pigs as hip be-boppers and the wolf as a jam session reject. In Tunes for ‘Toons, cartoon music historian Daniel Goldmark argues that the pigs are supposed to represent white musicians. I’m not sure I agree with this reading. I think what makes this cartoon special is that story deals with the music, and not the race of the musicians playing it. 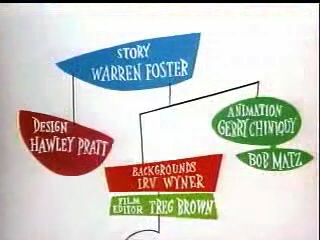 The opening credits closely resemble the design of a Calder mobile. Alexander Calder’s kinetic sculptures, dubbed “mobiles” by none other than Marcell Duchamp, were inspired by Calder’s visits with Piet Mondrian. In Jazz Modernism, author Alfred Appel Jr. describes Calder as an artist “whose playful forms charm (too easily sometimes?) like idiosyncratic dance routines and children’s art.” He goes on to connect the accessibility of Calder’s artwork to the jazz of Louis Armstrong, Duke Ellington and Fats Waller, whose music is “the touchstone of accessibility.” Take this idea with a grain of salt, but as we will see – the idea of artistic “accessibility” emerges as the main theme in “Three Little Bops.”

Upon hearing the wolf blow on a chorus of the blues, the pigs are quick to dismiss the wolf as a square. His wobbly tone and wandering improvisation doesn’t blend with the pigs and their “modern sound.” 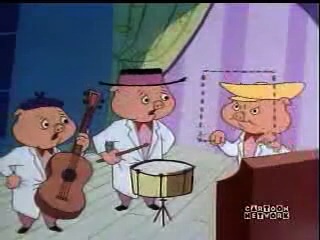 My favorite gag in the cartoon is when the wolf sits in the pigs. He gets out his music and flips to the right page. In any major jazz scene with a high level of musicianship, reading tunes from a “fake book” is taboo, a sign of poor musicianship – especially at a jam session. Of course, the pigs are playing without any written music.

An interesting aspect of the cartoon is that it represents the audience as being “in” on what’s hip. (As opposed to the typical “beboppers vs. the audience” stereotype that was prevalent ever since Variety declared “BOP IS A FLOP, COMMERCIALLY” in 1949). 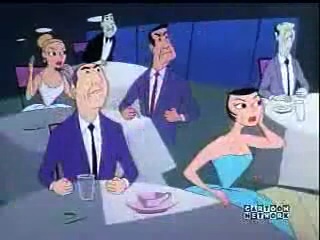 The audience yells, “Throw that square out!”

The irony here is that the pigs aren’t really playing “bop” at all. Their music (composed and performed by west coast jazz trumpeter Shorty Rogers and his band) is more akin to west coast swing and boogie-woogie. What makes the pigs “boppers” is that they subscribe to an elitist hipster culture. Freleng either co-opts the term “bop” to refer to his own idea of modern music, or he purposely uses more “accessible” music in place of actual be-bop to avoid alienating his audience. Regardless, he gets in a few digs at so-called be-bop culture.

The timing in this cartoon is really top notch – virtually every movement onscreen is synced to the music. We’re used to Carl Stalling’s manic tempo changes, written to score the frantic motions onscreen. The score to “Three Little Bops” is different from other Looney Tunes because the musical tempo stays the same for the entirety of the cartoon (with the exception of two gags: the wolf tries to get into the club by playing the ukulele, and later as a one-man-band. The additional music for these gags was likely composed by Stalling). Since the tempo is locked in, the animation timing engages the viewer with the groove. Check out the wolf’s shoulders after he’s thrown out of the jazz club – they keep grooving to the beat as he’s strewn out on the sidewalk. 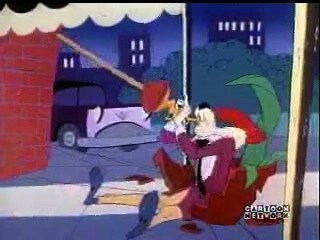 Three Little Bops has several quirky elements that distinguish it from the usual Warner Bros. short. Firstly, the opening credits appear before the main title, and the typeface on the main title is animated, bouncing to the music. Secondly, the pacing of the story is subordinate to the twelve-bar blues – and it’s fascinating to see how storyman Warren Foster works within the context of a musical form. And rather than ending with “That’s all, folks!” the cartoon concludes with “The End.” That Freleng was willing to break from formula this far into his career is a testament to his creativity as a director. There is nothing radically different about this cartoon. Rather, the subtle differences are what makes this cartoon really stand out in Freleng’s enormous body of work. He experiments a little here and there, but his cartoons remain “the touchstone of accessibility.”

Two other blogs in the Friz Freleng blog-a-thon explore Three Little Bops: check out the posts at My Five Year Plan and Supernatural…Baloney.